New Book about the Physics of Star Trek!

I have just published a new ebook on Amazon. You can find it here. It's titled Star Trek: Neutron Stars, Antimatter, and Other Topics in Physics.

"This work explores the physics behind concepts covered in Star Trek: The Next Generation episodes.

The vastness of space and our sheer curiosity of the unknown drive us to understand more about the universe, to seek answers to age old questions, and to explore.

From magical eddies of space plasmas to particles with unknown properties and mysterious solar events, this book takes on all horizons of known physics and gives the reader simple explanations of amazing phenomena." 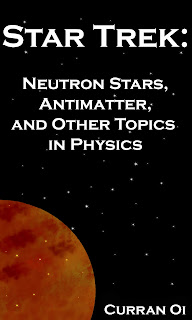 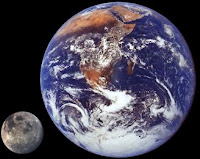 During "The Dauphin" the crew heads to a planet engulfed in a Civil War. This planet rotates once per time it circles its sun, meaning that one side of the planet is always light and the other is always dark. This phenomenon is called tidal locking.

How does tidal locking work, does it actually happen, and what are the consequences?

During Star Trek episodes it is all too common to hear Captain Picard say "standard orbit, Mr. LaForge." This puts the ship close enough to the planet to keep it moving in circular motion around it.

Synchronous orbit is also sometimes requested. What is the distinction between the two, and what physics is required to keep a ship in orbit? 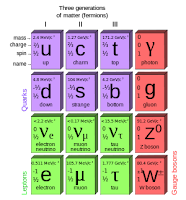 In an episode where Riker becomes first officer of a Klingon ship, there was a brief mention of neutrinos. A beam of neutrinos was used to remove organisms from the hulls of ships.

You may have heard of neutrinos, cute and mysterious little particles, but what are they and where do they come from? Could they actually be used to rid a ship of organisms?

The artificial gravity on the Enterprise has always confused me a little bit. I want to know how they do it!

Where does gravity come from and how can it be simulated in outer space? As it turns out, there are many ways to artificially simulate gravity.

Star Trek: Sound in Outer Space and on Other Planets

In Star Trek there is little or no mention of the fact that outer space is a vacuum. There is not air to breathe and no matter to provide resistance to a spaceship.

It is interesting to consider the properties of sound waves and the effect of outer space on how we are able to communicate. 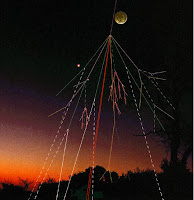 In outer space there is a type of very high energy radiation called galactic cosmic rays. These rays are comprised of charged particles, like atomic nuclei and electrons. They are one of the two major contributors to the radiation dose received by astronauts (the other coming from solar particle events), and the only one that it has been impossible to shield against thus far.

These galactic cosmic rays are ubiquitous in outer space.

While they are never, or very rarely, mentioned during Star Trek, they are a very important part of travel in outer space, and it is vital that astronauts and engineers know about them before leaving the safety of the earth's atmosphere.